This is Part 2 of a three part behind-the-scenes series on the recording production of Joel Miller’s 2020 JUNO nominated release, “Unstoppable“. If you haven’t done so, please click on the “Unstoppable” link and check out this incredible record. Don’t forget to support this hard working artist!

Joel knew having an experienced band comprised of strong players would lend itself to an efficient workflow and exciting interpretations of his music. We only had 3 days to record some very challenging repertoire so everyone needed to be well prepared and nimble. Joel came up with a stellar crew of musicians. Check it out… 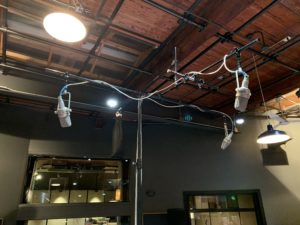 Joel and I decided Montreal’s Studios Piccolo was the best choice for the recording location as it offered a room big enough to accommodate the ensemble as well as the recording infrastructure to handle our needs. Even though it was our idea to allow the band to acoustically balance themselves in the room, there were several tunes where the aesthetic (and dynamics) of the drumming would over power the rest of the ensemble and bleed into all the spot microphones. Acoustically isolating the drums from the rest of the band for these tracks was critical to achieve the sound we were hoping for and Piccolo provided excellent options for this. Piccolo’s mic cabinet is incredible and I took full advantage of what they had to offer… including their restored Neumann M-50 tube mics that I chose as our main microphone array. My idea going into the session was that the main microphone array would be the “glue” of my sound which I would embellish with the spot microphones I placed on each instrument (Part 3 of this “session story” will talk about the realities of this concept!). 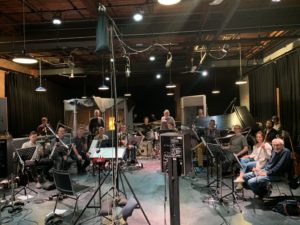 You’ll see in the above sketch of the band layout, I allocated specific mics to each instrument. As we proceeded some of this would change. If fact, I swapped the positions of the piano/bass/guitar with the mallet percussion/auxiliary percussion as you can see in this image of the band.

In our initial sound check, we quickly realized we needed to baffle off the bass and auxiliary percussion to minimize bleed of sound into the bass mics (Neumann M149 and KM184) and minimize the sound of the aux percussion into all the other mics. To add to that, the DI of the bass was not working at all and this is often a safety net for recording acoustic bass when there are many others around the bass producing sound. The baffling helped reduce their bleed but also blocked the acoustic sound of the band from reaching their ears of those being baffled. To compensate for this we employed Picolo’s slick iPad based headphone system for monitoring. It was also determined that the pianist David Ryshpan and mallet keyboard percussionist, Erin Donovan, also needed headphones as their parts often needed to synchronize together and they were positioned on opposite sides of the ensemble… great for the stereo spread but not great for their hearing each other.

A key component to an efficient recording session are the studio assistants. Patrice Pruneau filled this role with great skill and a calm demeanor. He and Gabriel Dubuc did the initial studio set-up even before I arrived at the studio. Patrice expertly ran the ProTools session and helped out with the SSL Duality console when routing needed to happen quickly or new instruments came into play. Gabriel was a godsend in helping  the musicians create the balances they needed in their headphones.

Drummer Kevin Warren did an excellent job interpreting Joel’s music and helped find a groove that set the vibe in each of the works. Here’s a shot of his kit in the drum iso booth. Those are AKG C12s as overheads… their strong character contributed significantly to the overall sound of the drums on this album.

As is the normal procedure on recording sessions of this nature (more like recording a classical ensemble than a rock band), we started each tune by recording a complete take followed by a listening  in the control room with Joel and I. We’d made sure the sounds were capturing the overall aesthetic that Joel was imagining and talk about tempo and overall vibe. As we recorded each subsequent take I’d be following along in the score and making notes where specific performances needed improvements or where thing went really well. 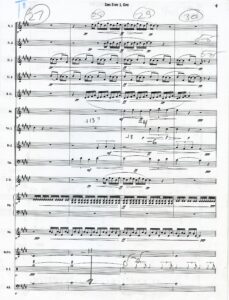 We’d then continue recording takes until we felt everything was covered. The image to the right is an example take sheet which helps me keep track of all the takes we recorded along with additional information which help in the editing stage of the production. To the left is a page from one of Joel’s scores. You’ll see where I’ve marked the score with plus and minus. The blue “8” at the top of the page indicates that there is an edit into take 8 at this spot.

Pretty much the whole album was recorded “live off the floor” with very few overdubs. We did record some drum overdubs and a soprano sax part that Joel couldn’t play because he was conducting the band. Christine Jensen was brought in to conduct four tracks on the album in tunes where Joel was playing with the band.

The sessions went incredibly smoothly considering all the logistics and challenges inherent in a session of this type. Studio Piccolo and their staff were fantastic and were very supportive throughout the process. After these sessions finished all the production moved to my studio in Mahone Bay, NS where further overdubs, editing and mixing occurred. This will be the subject of Part 3 of this “Session Story”. Stay tuned for that! If you have any questions or comments, please write me your thoughts in the comments section below this post.

Here are a few more pics from the session…