In each successive music project that Joel Miller releases, he unleashes ideas and musical expression that’s like nothing he’s done previously. That’s Joel’s path as an artist. His most recent 2020 JUNO nominated release, “Unstoppable” is no exception. It’s a collection of music two years in the making and a direct result of his Graduate studies in composition with mentor/professor John Rea at McGill University. 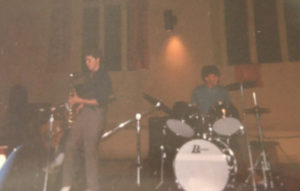 Joel and I grew up together in the small town of Sackville, New Brunswick and our passion for music (and skate boarding) kept us engaged in interesting activities together. Beyond skating Joel’s homemade half pipe,  we played together in his first jazz combo, Les 5, along with band mates David Whitla, Paul Mitchell and John Calvert… we go back. Over the years as Joel grew as an artist I listened with anticipation to what he he’d come up with next. Finally in 2018 Joel contacted me to ask if I was interested in producing and recording his next and biggest undertaking yet… the recording of Unstoppable. Finally! “Yes!”

The aural image Joel had in his mind was that of an large acoustic ensemble. One that could be placed on a stage and it’s sound balanced naturally in the space. The ensemble consists of two trumpets, trombone, french horn, tenor sax, bass clarinet, two B flat clarinets, two flutes, piano, bass, drums and three percussion: the same range as an orchestra but with no strings (other than the bass).  A good portion of the work I’ve done over the years is recording acoustic ensembles of varying sizes and genres so my skills as a music producer and engineer fit the bill nicely. 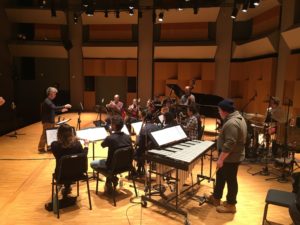 Joel invited me to come to Montreal to help oversee a recording being made by two students enrolled in the McGill Masters of Music in Sound Recording program (my alma matter). Through his graduate studies he was able to collaborate with the recording program to make a high quality demo which he could use to help raise funds for a full on recording the following year. The recording took place in Pollack Hall at the McGill Faculty of Music and it was a great opportunity for us to listen to the band in a decent acoustic through a microphone array and over loudspeakers. It gave me a wealth of information with regards to how to approach a recording of this nature. How did the ensemble blend? Will isolation be required? How many microphones will be required? What facility/studio will accommodate a session of this nature? Will we try and record without the need for headphones?

Soon after this session Joel began an intense period of music composition, grant writing and preparing his music for rehearsal and eventual recording. One of the first big decisions he needed to make was who will be in the band? The second: where do we record it.  As Joel describes it, the music and more specifically the percussion/rhythm section represented on Unstoppable fall into four distinct “universes”. Jazz/rock; Latin; melodic (mallet percussion); auxiliary (delivering texture). This poses a significant challenge in a recording environment as each of these universes embody very different dynamic worlds. How best do we create a recording that captures this very acoustic experience and translates it coherently through two speakers? After the demo session, it was clear to me that we would need access to some sort of isolation for the most dynamic component of the music, the drums. This narrowed down our options as to where we could record.

In Part 2, the questions that came up will be answered and we’ll look under the hood at the technical details of how we made it happen.