‘Tis the season! My “part 1″ post from last season focused on the logistics around coordinating and recording Tafelmusik’s Messiah. This post will walk you through everything that went into the post production of this project. It might be interesting for you to read last year’s post as a refresher as to what we did in the recording: http://stonehousesound.com/recording/messiah-in-the-making/

In hiring Producer Jeff Reilly, beyond overseeing production at the recording, it was agreed that part of his job was to provide me with an “Edit 1″ paper edit. “Edit 1″ refers to the first complete edited version. From the notes he took during the session and by listening to the recorded takes, Jeff provided me with a ‘blocked score’: a score of the music indicating which takes to use where. Given the length of the complete Messiah, this was no small undertaking.

While Ivars was booked to conduct Symphony Nova Scotia in Halifax, we arranged a meeting (Ivars, Jeff and I) to listen to some preliminary editing and overall sound. I brought in my mobile rig from my studio in Mahone Bay to the Symphony Nova Scotia offices in downtown Halifax and set up a nice listening situation for Ivars and Jeff. We talked about big picture concepts and left it at that. It was valuable for the three of us to sit in the same room one last time before the editing and mixing started in ernest.

Over the next few weeks Jeff worked on Edit 1 and at the end provided me with a big fat Messiah score with edit markings throughout and a list of notes.

As the editing proceeded I bounced a few questions off Jeff but for the most part things were clearly laid out for me. It had been decided that to fit the budget and agreed upon few, Jeff’s participation would not carry-on beyond providing me with edit 1. Following that Ivars would take over with all the remaining musical and mix oversight. Ivars is very much an expert in all things Messiah. His knowledge runs deeper than perhaps anyone else in the world right now! He has musical reason for each and every interpretive detail he realizes in his musical direction. This recording of the complete Messiah with Tafelmusik has been a dream for Ivars. Needless to say, he would go above and beyond to allow these recordings the best chance possible to reflect his interpretation of Handel’s score. 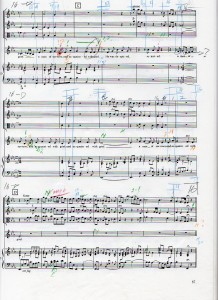 In order to keep the editing process as efficient as possible Ivars, Tricia Baldwin (managing director) and I decided to schedule a five day editing session at my studio to sort through all edit decisions that needed to take place, and finalize them, plus determine the final mix for the entire piece. As you can imagine with 142 minutes of music this can be a very time consuming process given the high level artistic expectations. Our five days (which turned into six!) at the end of June were very focused and intense… in a good way. Ivars and I chugged through the edits one by one making sure that what Ivars was hearing in his head was being realized in the recording.

This page of the score show an example of how we were able to cut between the takes recorded live with audience and the takes we recorded in our “patch session” without audience. Sometimes these edits can be quite specific for what we are trying to fix.

As per what usually happens at the end of a session, we were running out of time but not before making sure the overall mix of the music was creating a well balanced and enjoyable listening environment. Since we were using many mics, subtle balances could be achieved by dynamically adjusting the levels of each mic and placing these sounds in a natural sounding acoustic suitable to the music. Remember, Koerner Hall when full with audience members becomes quite dry, so we needed to tastefully add some artificial reverberation to allow the music to resonate and mix. For those who are curious, I use Altiverb by Audio Ease. This reverb plug-in uses convolution techniques to create realistic reverb from samples of real spaces.

After Ivars left my studio there was still plenty of work to do. I rendered all our works down to stereo mixes (the format for the final release) and posted them to a private playlist on SoundCloud where Ivars was able to download and listen to all the work we did together in his home listening environment.This is very valuable to me as it represents Ivars’ reference to overall sound. He was able to provide me with final comments on the edit and sound all centered around a listening chain which might represent well that of the typical listener of this recording. Using Ivars’ notes (see the image to the right… a typical page of notes from Ivars Taurins) as my reference I went back in and adjusted a few edits, tweaked the mixing a bit then did another mix down which I recorded to CD and couriered it off to Ivars and Tricia. At this point most of the editing and mixing was finalized and I was making sure all the track spacing was well paced and split between the two CDs.

Now for the final mastering. This stage is where I make sure the overall levels of the CD full and comparable to other recordings. I also insert all the coding for the CD master which includes Track IDs, ISRC codes, CD text and the like. These final steps are critical as what leaves my studio is what gets pressed onto the CDs. If there is an error, it’s an error that I allowed! So when I generate the CD master image, I make a duplicate reference copy to listening to which I listen back to with headphones on to ensure no error was introduced to the audio at any stage of this process. If there is something is missed, it’s at this point I’ll hear it, stop, go back to the original final and make the master and copy again. When you’re dealing with 142 minutes of music this can be a fairly laborious process! Once I gave it my Quality-Control-approval I burned a copy onto CD and sent it to Ivars for his final and approval which he gave on July 25th! At that point Tricia can take the master and send it off for replication.

So there you have it: The making of Tafelmusik’s Messiah which you can take a listen to and buy right here: http://www.tafelmusik.org/watch-and-listen/recordings/handel-messiah

This excellent CD was recognized with a JUNO nomination earlier this year.