This ‘session story’ is part 2 of the behind-the-scenes description of the making of Old Man Luedecke’s most recent recording “Domestic Eccentric”. Go here to read Part 1.

How do you load-in a studio’s worth of gear into a cabin nestled in the woods with 40cm of snow down?

Chris (AKA Old Man) Luedecke gave Willie Rhyno a call and he came by with his front end loader and plowed out a path for me to navigate my RAV4 down to transfer my mics, preamps, stands, cable, speakers an other gear into the cabin where our recording was to take place.

I’m fully committed to digital recording and have carefully selected the front end of my system to optimize the sound I record for clarity and transparency. Microphone choice and placement become critical in terms of how it captures the sound coming off the instrument and how this sound supports the music being recorded. I currently use Merging Technologies “HORUS” which has incredible sounding high definition microphone pre-amplifiers and Analogue to Digital conversion in one 2U rack. It connects to my DAW (either ProTools or Pyramix depending on the project requirements) via an Audio-over-IP protocol called RAVENNA/AES67.

You see in the pic to the right there is an additional mic pre-amp on top of the HORUS (bottom unit). This is an AEA unit designed specifically to amplify ribbon microphones. I used it for the AEA R88 microphone I used on this session.

I like options when I’m recording… especially when I’m in the same room as the musicians and discrete, isolated monitoring is tricky. It gives me the options in the mix stage to choose the sound which best fits the music (without taking up time swapping mics in the session). In the photo to the left you’ll see a ribbon mic (Beyer Dynamic M130) for a warm sound and attenuated high frequencies (the banjo likes the ribbon), large diaphragm condenser (Neumann TLM-170) for a large Neumann sound with a robust bottom end and a small diaphragm condenser (Peluso P84) for a tight accurate pickup. On the vocal you’ll see a Pearl Microphone Labs TL-4. This is a dual rectangular diaphragm condenser (with separate output for each capsule) that sounds terrific on many sources. It happened to be a really good match on Chris’ vocal.

photo credit Kate Inglis[/caption]Tim O’Brien, who flew in from Nashville brought along with him 6 instruments in his arsenal: his voice, fiddle, mandoline, guitar, electric guitar and a beautiful Bouzouki. Each instrument required a specific microphone configuration to capture the sound as I heard it. In the photo on the right you will see a Royer R-121 ribbon microphone, a Peluso P-84 small diaphragm condenser and on his vocals a Mojave Audio MA 300 large diaphragm condenser. As Tim switched between instruments I’d move the mics around to where I found they sounded the best. 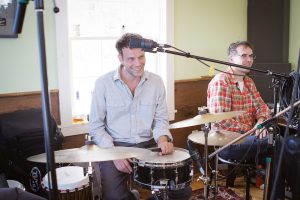 photo credit Kate Inglis[/caption]Nick Halley came in on the session for a day playing his unique style of percussion / drums on several of Chris’ tunes. I positioned the Royer R-88 stereo ribbon mic over the kit for a beautifully smooth overhead pick up (not seen in the pic to the left). In one tune where Nick was singing a background vocal track I used a Neumann TLM-170 to pic up his voice but also the instruments below. 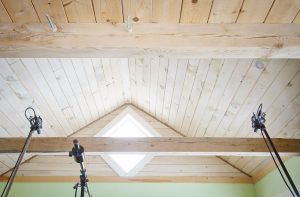 photo credit Kate Inglis[/caption]As was Chris’ intent, it was anticipated that the cabin would become an important part of the sound. In order to allow it a fair opportunity to shine I used a spaced pair of Neumann KM-130 omni microphones to capture the room and a slightly more distant perspective of Time and Chris’ performance. When not recording drums with the AEA R-88, I used it as a stereo alternative to the KM-130s, positioned in front of Chris and Tim. 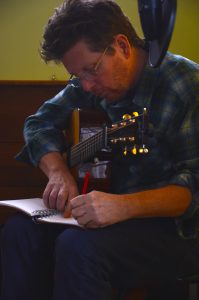 photo credit Kate Inglis[/caption]Our process went something like this: Chris and Tim would go over the tune, Tim would make notes of what instrument he thought would best work, write the lyrics when needed and work out the harmonies. As they were doing this I’d fine tune mic positioning. When they were ready I put Pyramix into record and off we went. As they played through the tune, I’d have a line-by-line layout of the lyrics and arrangement so I could followed along marking where things went well and where it could have been better (intonation, ensemble, and overall performance). They’d often record 3 or 4 takes of each tune. When we felt we had it in the can, I’d immediately prep a editing plan and cut it together while they were taking a break. When my edit was ready, we’d listen to it together. If we were happy, we’d move onto the next tune. If we weren’t, we’d do another take and pay special attention to where we needed to make improvements. This proved to be an efficient process and it guaranteed that we had the performance we liked when all was said and done.

At the end of five days of solid recording we had an awesome record in the can and a good time was had by all. Tim hopped on a plane back to Nashville and I loaded up the RAV4 with my gear and drove back down the road to my studio leaving the cabin as it was before we arrived.