This ‘session story’ is part 3 of the behind-the-scenes description of the making of Old Man Luedecke’s most recent recording “Domestic Eccentric”. Go here to read Part 1 and here for Part 2. This post will talk about how the mixing stage of the production played out.

The entire session for Domestic Eccentric was recorded in Merging Technologies Pyramix at 96kHz sampling rate and a 24 bit word length. Once the tracks were recorded, they stayed “in the box” from editing through to the final mix. “In the Box” refers to how the audio, once digitized, stays in its digital domain all the way through post production (no intermediary conversions to analogue then back to digital). The audio was processed 100% via specially chosen, high quality VST plugins. Staying in the box allows for very efficient total recall of all mix parameters and automation. When the mixes are revised, it became a streamlined operation to update and bounce new versions for continued listening by Tim and Chris. Studio monitoring was through a Grace Design m904 monitor controller with the primary speakers being Dynaudio Acoustics BM-15A. As mixing progressed alternate monitoring environments were employed to ensure optimum compatibility on a wide variety of playback scenarios. Mixes were checked in the car, on headphones, small speakers, computer speakers, Sonos speakers and more.

Before flying back to Nashville after our recording sessions,Tim O’Brian and Chris (Old Man) came by my studio to rough in the overall balance and double check timbers and overall feel for the mix on a tune by basis. As we listened to each track, the presence of the cabin’s acoustics in the overall mix was the first to be discussed . As mention in part 2, I recorded the room through 2 omnidirectional microphones so it could be mixed in (or out) as the music demanded. There were some tunes where the cabin takes an important roll in the overall vibe.

On the contrary, there were tunes where the cabin ambience wasn’t necessarily helping out the intent of the music and lyric. In these cases I turned to a tool which I use very regularly, Altiverb. Altiverb is a convolution reverb (featuring top quality samples of real spaces to create reverb) that is very flexible and sounds fantastic. We flipped through some different possibilities and found a room that Tim had actually worked in: Sound Kitchen Studios in Nashville. This reverb was very compatible with the sound of Chris’ cabin and added a little more depth and decay to tunes that required a more diffuse ambient field. 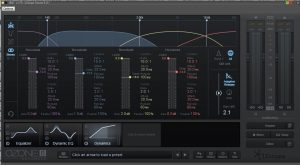 In addition to reverb, EQ and dynamic processing was used to shape the sounds and help them fit around the vocal. Old Man Luedecke’s music is driven by his clever, witty and meaningful lyrics.  The mix played a critical roll in delivering this message to the listener. On this session I primarily used plugins by iZotope and Sonnox. iZotope‘s Ozone is an extremely versatile and high quality plugin that controls dynamic range and equalization using a very intuitive flexible interface.  Sonnox plugins are extremely well designed, excellent sounding tools providing a wide range of processing options. 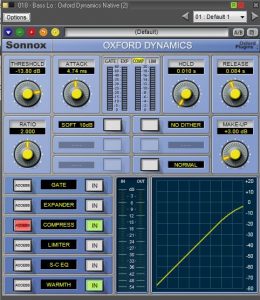 One of my favorite plugin from Sonnox is Oxford Dynamics. It is a standard compressor/limiter but it has one unique, very simple but extremely effective control: warmth. Although simply named, this control adds a variable amount of harmonic distortion, allowing for a precise analogue shaping of the signal.

In Part 2 of this session story series, I talked about the variety I microphones that were used on this session (ribbon, large diaphragm condenser, small diaphragm condenser) and it’s in the mix stage that I turn to these different options to build the overall sound for each track. What was chosen depended on the instrument, the way it was being played and ultimately how it will combine with the other elements of the arrangement whether its Tim’s fiddle, Jennah’s backing vocal or Nick’s drumming. Sometimes it was a single microphone, other times a combination of mics were used to achieve the final sound.

As the mixing process continued, revisions were posted to SoundCloud for Tim O’Brian to review and provide either feedback or approval. Old Man Luedecke, who lives 15 minutes down the road, would drop by to check in on the mixes and provide critical feedback. Once we felt the mixes were done, everything was uploaded to David Travers Smith in Toronto who did the mastering on the project.

Several revisions of the master were carried out with Chris and I critically listening to make sure these last tweaks to the sound were making the improvements we hoped for. Following the CD mastering David Travers Smith also re-mastered for the vinyl release. The audio specifications for vinyl pressing is very different to that of CD and a whole set of new choices needed to be made as a result (for example, highly dynamic tracks do not fair well on the inside grooves of an LP).

Mixing is an involved step of music production where sonic textures can be shaped and the message behind the tune enhanced and delivered. I find it one of the most rewarding steps in the music recording process.